Please note that health information can only support the conversation with a psychotherapist or physician: It should never be a substitute for it.

We have compiled for you some important information on mental illnesses which spans across the different diseases. You can reach the information directly by clicking on the links in the pageoverview.

Mental health – When your soul is in balance

The term "mental health" refers to our "inner life", meaning how we think and feel, but also how we act. Mental health is understood as a state of mental well-being. A kind of ideal condition which enables us to fully exploit our potential and to cope with burdens and stress situations. With a healthy mind, a person can be efficient in his work. He can also contribute something to his environment, meaning the lives of his family, his friends, and neighbours.

Mental health does not simply mean the absence of mental health problems. There is no "all or nothing" principle here: Most of us spend most of our time somewhere in the middle between "mentally healthy" and "mentally ill".

Mental illnesses – When your soul suffers

Not only the physical health, but also the mental health of a person fluctuates from time to time. Particularly in times of heavy burden – such as after the loss of work or the death of an important person – it is not easy to maintain balance.

People with mental health problems experience different signs of illness (symptoms) which vary greatly. The symptoms can have a greater or lesser influence on person's everyday life and ability to function. Common reactions to stressful situations are feelings of sadness, fear or strong inner tension, which for a limited time can be very severe. Generally speaking, these symptoms disappear after a certain time. When the symptoms persist for a long time, or further symptoms arise – such as panic attacks, suicidal thoughts, or delusions – and lead to ever increasing limitations and problems in everyday life, the persons affected and their families should seek professional help.
The term mental illnesses encompasses different disease patterns which occur with different levels of severity. A physician or psychotherapist can find out in a detailed diagnostic interview whether and from which mental illnesses the person is suffering.

Mental illnesses cannot "simply" be determined (or to use the technical term: diagnosed) with the help of a test, as is the case, for example, for a broken bone with an X-ray. A clinical diagnosis can only be made by an experienced specialist physician or psychotherapist. Before this, a medical examination is necessary to rule out physical illnesses - for example a thyroid disorder - as a contributor to the psychological burdens.

After this, a detailed conversation takes place with the specialist physician or psychotherapist about the individual burdens (symptoms), the family history and further physical and mental illnesses of the patient. In this respect, psychological tests like questionnaires can also be used. This diagnostic interview is about to capture the overall picture of all symptoms and classifying this to a diagnosis. The physician or psychotherapist determines whether the patient is suffering from one mental illness or from several, and how strongly they are pronounced. This is important as the therapy can differ considerably depending on the type and severity of the illness.

The classification of a diagnosis is mainly undertaken using the "International Classification of Diseases, 10th Revision" (ICD-10). The ICD-10 is published by the World Health Organisation (WHO) and is largely legally binding in Germany. This means that psychotherapists, physicians, and clinics have to indicate an ICD-10 diagnosis to the health insurers for the costs of treatment to be covered.

The ICD classifies the mental illnesses into so-called diagnostic groups:

Important to know: The diagnosis tells us nothing about the cause.

Mental illnesses are not directly attributable to a cause. For the development both biological factors (e.g. genetic load, metabolic changes in the brain), family conditions (e.g. parents with depression) and stressful life experiences in the past (e.g. separation, death of important people) are considered.

The interaction of the different risk factors determines the vulnerability of a person. It provides information about how stress or current stressful life events - such as conflicts, serious diseases such as cancer, puberty or separation - impact on the human organism. For some people, normal everyday demands can already feel overwhelming, while other people only enter a state of mental crisis when exposed to severe stress or trauma: 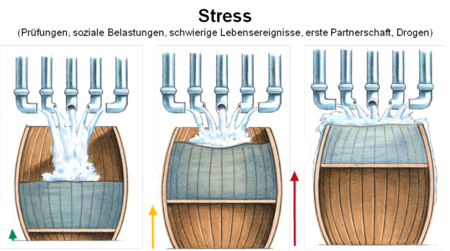 In many areas of medicine, prevention (e.g. through vaccinations) and early diagnosis (e.g. through a cancer check-up) can prevent consequential damages from illnesses. In the last few years, this principle has also increasingly been applied to mental disorders such as addiction, eating disorders or psychosis.

Prevention means measures such as stress management, which are targeted at healthy people. They aim to help reduce risk factors and in this way prevent a mental illness from emerging.

Measures of early diagnosis are aimed at people who are in the early stages of an illness. The goal is to detect mental illnesses early on, help sufferers and their families as quickly as possible, and to prevent or diminish a progression of the illness. Studies clearly suggest that early treatment improves the recovery process or even prevent the pathogenesis (e.g. psychosis). This means that the less time passes from the beginning of the illness to the treatment, the better are the chances of recovery.

In the following table, the most important groups of psychotropic drugs and their main areas of application are presented:

When taking medication, besides the desired effects, undesired side effects can also occur. The physician providing treatment informs the patient about this during a consultation so that together, the physician and patient can weigh up the risks and benefits. Generally, serious side effects are rare, or diminish over the course of treatment. However, as interactions with other medications can occur, the patients should always consult with their physician before taking another medication – even over-the-counter medications.

Psychotherapies can take place in group sessions, individual sessions or in a combination of the two in out-patient or in-patient treatment settings. Moreover, there are different types of psychotherapy. These differ in terms of the basic attitudes of the psychotherapists, their therapy concept, and in terms of how they explain the emergence of mental illnesses.

For three of these types, the health insurer covers the costs:

There are two further approaches to psychotherapy which are seen as effective but for which the costs are not covered by the health insurers.

A psychotherapy that corresponds to the needs and ideas of the patient can generally be more helpful than an approach which is alien to the person affected. However, it is at least equally important that the patient feels in good hands with the psychotherapist and that he feels he is being treated in a professionally competent way.

Anybody who decides to undergo psychotherapy should speak to his health insurer in advance to establish whether the costs of the treatment will be covered. The same is true for private health insurance.

Behavioural therapists understand "behaviour" not only as outwardly visible actions, but also thoughts, feelings and physical processes. They assume that behaviour is to a large degree learned. This means that burdensome patterns of thinking and behaviour can be "unlearned" and more helpful new ones can be learned.

In a behavioural therapy, the patient is supported in understanding and coping with his difficulties. In this sense, behavioural therapy is help for self-help. The patient and therapist look together at concrete problem situations in which, for example, the patient would have liked to have reacted or felt differently. Such excerpts should help to provide an understanding of why the patient behaves in this way. Included in these reflections are also the life history and current life circumstances of the patient. Solution strategies are developed and tested in the next step. The patient then checks in his everyday life how helpful the strategies are and reports on his experiences in the next consultation. In this way, patient and therapist work together on an equal footing. Often, problematic behaviours are called into question and new ones are tried out.

Further elements of behavioural therapy are psychoeducation (information about the illness and its treatment), confrontation with feared situations (exposure), even outside the therapy room and the targeted training of skills and competences (e.g. social competences such as "saying no" or "making contacts", but also stress management and relaxation).

In psychoanalysis, the focus is on the so-called "subconscious". In this therapy approach, it is assumed that subconscious conflicts and experiences in the past (above all in childhood) contribute to causing and maintaining mental illnesses. The subconscious conflicts determine how a person perceives and evaluates himself, others, his relationships, his feelings, thoughts and actions.

The therapist supports the patient in making the subconscious conflicts and their effects on the present visible. They should come alive again in the here and now so that the patient can understand and tackle them together with his therapist.
During the consultations, the patient lies on a sofa and does not have eye contact with the therapist. This has the advantage that the patient can concentrate completely on his thoughts, feelings and inner pictures. Analytical psychotherapy is a long-term therapy and generally lasts between three and five years, with several sessions per week.

Although psychodynamic psychotherapy has its origins in psychoanalysis, the two therapy forms differ in their duration, their therapy concept and their therapy goal.

The central focus of psychodynamic psychotherapy is not on subconscious conflicts but on currently active psychological conflicts. By discussing earlier experiences and behavioural patterns, the patient should understand his current problems. Moreover, the therapist supports the patient in activating existing or subconscious abilities in order to solve the current problems.

In this form of therapy, the therapist and patient sit opposite each other. Psychodynamic psychotherapy lasts for about two to three years, with sessions taking place usually once a week.

Client-centred psychotherapy assumes that every person has the ability to heal himself, to solve problems and to achieve personal growth. The sufferer is "an expert on himself".

The process of development and recovery is supported in client-centred psychotherapy through the therapist feeling his way into the patient's world of thoughts and feelings and – without making any judgements – giving feedback regarding what he felt himself when doing so. The therapist gives the patient sufficient space, does not set themes, offer advice or interpretations. Instead, time and again, feelings are repeatedly discussed that currently emerge in the situation. The therapist behaves openly and honestly towards the patient and accepts him unconditionally. In the course of the therapy, the patient should learn to understand and accept himself.

In the consideration of a mental illness, systemic family therapy integrates the relationship between members of a family. The problem or the illness, but also the strengths, should not only be seen within the individual but as part of the whole "system", i.e. in the family or also in a team. Systemic treatment can be carried out as family therapy but also as pair therapy or individual therapy.

In systemic family therapy, the independence and self-worth of each individual family member should be strengthened, the communication and exchange between the family members should be improved and harmful relationship patterns should be recognised and changed.

Guidelines are systematically developed aids for physicians and psychotherapists for making medical decisions in specific treatment situations. They are based on current scientific findings and procedures that have been tried and tested in practice.

Informationen zur Teilnahme
Cookies make it easier for us to provide you with our services. With the usage of our services you permit us to use cookies.
More information