Please note that health information can only support the conversation with a psychotherapist or physician: It should never be a substitute for it!

What are somatoform disorders?

"Unclear" means that no physical cause has been found by medical examinations that would sufficiently explain the extent of the complaints. Besides pain in various body parts (e.g. back, stomach, head), dizziness, digestive problems, heart troubles or breathing difficulties can occur.

Most people occasionally experience unclear physical complaints in their daily lives. Only if these complaints persist over a longer period, lead to significant suffering and considerably impair the everyday life of the affected person, we call it somatoform disorder. Often the terms somatization disorder, functional disorder or, more recently, somatic stress disorder are also used.

The somatoform disorder is characterized by one or more physical symptoms that are associated with considerable suffering, anxiety, and functional dysfunction in everyday life. The symptoms last at least for a period of 6 months.

How frequent are somatoform disorders? 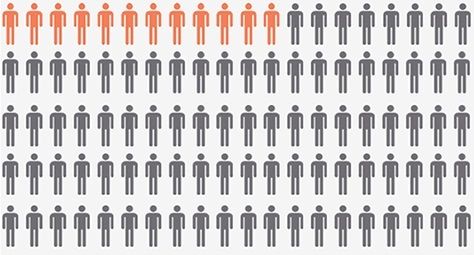 Are there different forms or progressions?

There are different forms of somatoform disorders. For instance, there are patients who suffer from a large number of different unclear physical complaints. They complain, for example, of pain, digestive problems (e.g. diarrhoea), and heart and circulatory problems (e.g. racing heart). Usually, these complaints have already persisted for several years. In that case a somatisation disorder might be diagnosed.

This is different to a pain disorder, in which strong and often persistent pain exists in a particular area of the body. Frequently, a physical cause was initially found (e.g. a slipped disc). However, the pain remains even after the physical cause has been remedied (e.g. through an operation).

In a hypochondriacal disorder, the affected person is tortured by the fear of suffering from a serious illness (e.g. cancer). Existing physical complaints are mostly interpreted as a sign of the respective illness. Medical examination results which speak against the presence of the feared illness can only alleviate the fear for a short time.

How do somatoform disorders emerge?

The emergence of somatoform disorders is a complex process for which there is not just one particular cause. Rather, the concern is with an interplay of different factors which act over several years.

Possible factors can be: 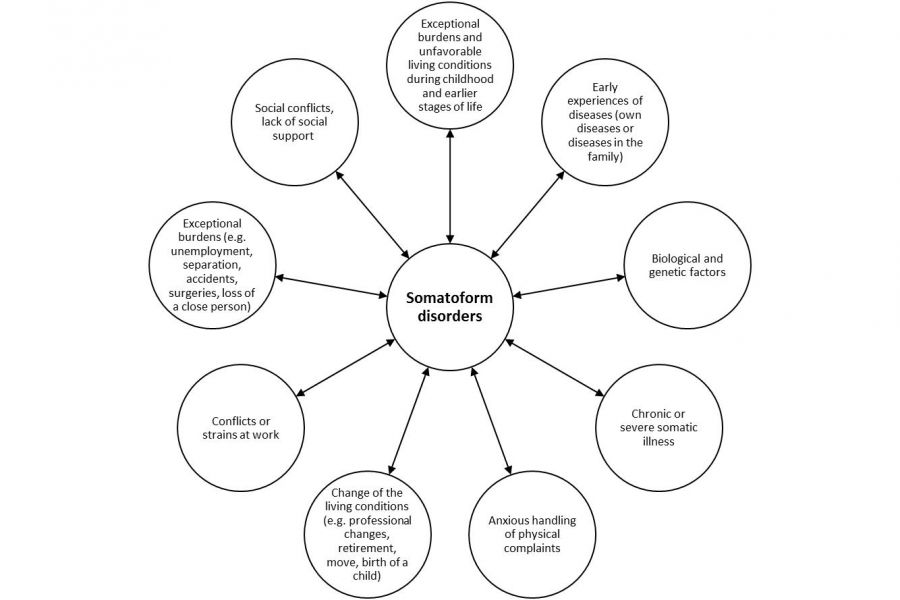 Interaction of body and soul: In somatoform disorders, "normal bodily processes" are perceived more keenly and seen as a sign of a physical illness. Usually, there is an individual trigger (e.g. stress, burdensome life situation) which leads to a normal physical reaction. The heart beats faster, one becomes tense or has a nervous stomach. Some people then ask themselves: "What does this mean? What illness do I have?". The consequence: The more intensively the person steers his attention to the complaints, the stronger they become.

To get to the bottom of the cause, doctors are often repeatedly called upon. But the positive finding that there is no physical illness does not reassure the patient. Rather, they feel that their suspicion is confirmed. "If the doctor keeps taking time for me something is surely wrong." Patients often receive different diagnoses from physicians from different disciplines (for example, neurologists, orthopedists) who do not provide comprehensive explanations for the complaints and are increasingly worrying for the patients.

Many people also tend to go easy on themselves. They avoid physical activity in order to alleviate the pain. And this can work in the short term, but in the long term this avoidance behavior leads to a worse physical condition and consequently to further disagreeable sensations. Through this vicious circle, the complaints can deteriorate further over years and strongly impair the affected person’s life.

Among other things, there are indications that a genetic predisposition and traumatic events in childhood increase the risk. Our mental well-being is closely linked to physical processes, among other things, via stress hormones and the autonomic nervous system. Long lasting physical complaints can also lead to psychological burden. In such a case, it is no longer helpful to seek just one cause.

Ultimately, various physical, psychological and social circumstances lead to the fact that some people develop a somatoform disorder and that the complaints persist.

What can be done to prevent it?

When bodily complaints occur, it is recommendable, together with the GP, to consider not only physical but psychological causes in good time: "Are there currently any burdens in my life that might be the reason for my complaints?" Wanting to rule out all possible physical illnesses before psychotherapy harbours the danger of chronification. Moreover, some examinations encompass operations, which can themselves lead to new complaints.

How do you find out if you have a somatoform disorder?

With physical complaints, the GP is the first point of contact. He will first thoroughly examine the sufferer or discuss already existing findings. If there is no physical illness to sufficiently explain the complaints, a diagnostic interview with a specialist physician for psychosomatic medicine or psychiatry or a psychotherapist is useful. He will ask the patient in detail about his complaints and his current life situation. Unclear physical complaints often occur as attendant symptoms of other mental illnesses (e.g. anxiety disorders, depression). Therefore, it is also clarified whether the complaints possibly point to another mental illness.

How are somatoform disorders treated?

Scientific investigations have shown that psychotherapy is effective in somatoform disorders. It helps the patient to learn how to deal with his physical complaints and to cope better with his everyday life. Individual elements in the therapy can be:

Medication (psychotropic drugs) can also help under certain conditions. Whether and which medications should be used in the treatment is agreed upon between the physician and patient.

Sufferers with milder complaints can initially be well cared for by their GP. GPs with the additional qualification "Psychosomatic care" are particularly trained for this. The GP always remains the first contact person for the complaints, by coordinating examinations and treatments. If the GP treatment alone is not sufficient, then, for example, specialist physicians for psychosomatic medicine and psychotherapy or üsychotherapists are the right contact persons.

A complete list of the clinics for psychosomatic medicine and psychotherapy in Hamburg and surrounding area can be found in the Therapy Guide for the City of Hamburg (German version) from page 139.

What can friends and family do?

People with unclear physical complaints are often met with a certain scepticism. They often feel accused of imagining their complaints. This leads to a building up of additional frustration and unease.
It is therefore important that family members and friends acknowledge the illness and are there for the affected person. However, going completely easy on them and relieving them of all tasks and physical burdens can negatively influence the progression of the illness. Therefore, it can be advisable to include the family members in the therapeutic treatment from time to time and for the family members to inform themselves well about the illness.

I was 30 years old when a friend died of cancer. And then it was for me the first time that I couldn’t cope in life, I felt somehow uprooted.

Marietta B, experience of a somatoform disorder

suffer from a somatoform disorder in the course of their lives

Strong partners
Cookies make it easier for us to provide you with our services. With the usage of our services you permit us to use cookies.
More information